speedEV is an RC car designed to make driving as simple as possible. We have implemented intelligent driving controls which allow anyone to pick up a controller and enjoy driving at high speeds.

speedEV sends real-time car data over bluetooth to a remote computer. The computer interprets the data, allows users to visualize it, and sends speedEV a modified control algorithm to enhance the driving experience.

speedEV is built to last. We used tough materials like ABS and aluminum that make speedEV capable of enduring most conditions thrown at it. We are keen on creating an RC car that will hold up through the years.

speedEV, as the name suggests, is speedy. Its motors generate 1 horsepower and can accelerate to 28mph in under 3 seconds!

Our RC car contains three major mechanical systems, the chassis & mounting plates, the two drivetrains, and the steering system. Each system was designed to be easily manufacturable within the time and cost constraints. Our design decisions were made around a goal of creating an enjoyable driving experience. Analysis was performed to ensure that every component could withstand the forces they experience.

The design decisions made in the drivetrain make the most impact on the driving experience. We chose to use two seperate high horsepower motors so that we were never mechanically power limited. We chose an overall gear ratio that allows us to reach a reasonably high top speed, while maintaining enough available wheel torque to break traction at almost any speed. Having a drivetrain system that is slightly overpowered for our application allows us to use our custom electronics board and integrated sensor suite to actively limit and control our motors; ensuring an easy and enjoyable driving experience at any speed.

Our chassis and various mounting plates are all made from waterjet ABS plastic sheet. This material was chosen for its impact resistance, manufacturability, and relatively low cost. These ABS components utilize robust mortise and tenon joints. The components were designed to reduce stress concentrations and absorb impact energy, ensure our car is robust enough to be driven hard.

Our steering system is a simple two-linkage mechanism to reduce slop and increase steering precision. The joint between the wheel assembly and the steering linkages utilizes a friction fit; although this requires more maintenance, it increases the longevity of our mechanical systems and reduces the need for repairs. If our front wheel hits an object, instead of the mechanical components permanently deflecting, the steering friction fit slips, absorbing the impact energy. 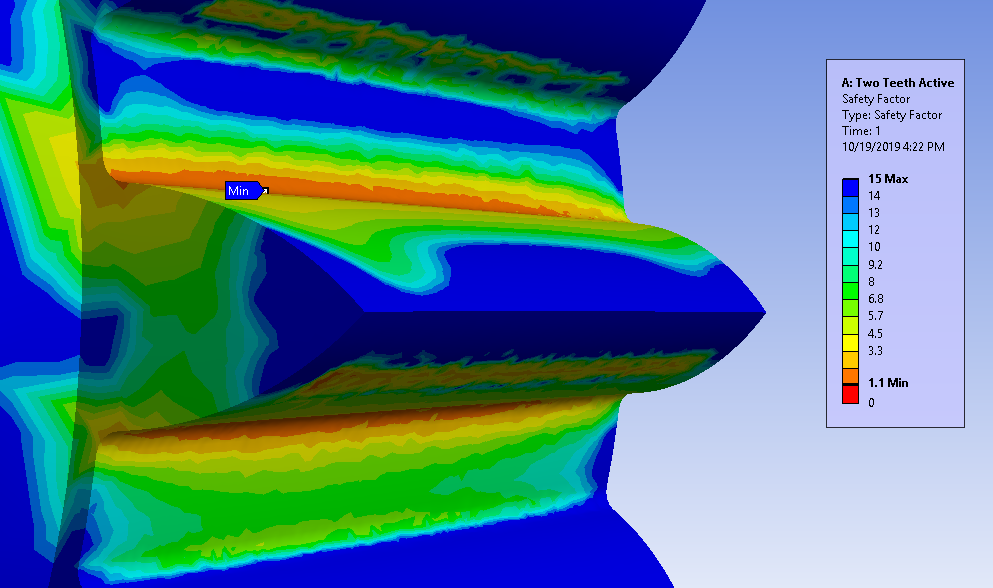 The electrical system on the car is what connects all of the communications and controls to the mechanical system. We opted to go for a custom PCB rather than an arduino because we could make harnessing easier and provide breakouts for better integration.

Some key features of the system include a buck converter for steady and efficient power conversion from the battery. A problem we encountered early on was that an Arduino couldn’t drive all of our electrical components of a 9V battery. A buck was designed and implemented to mitigate this issue. A drawback of it includes the space it takes up compared to a cheaper but less efficient linear voltage regulator.

Another implementation is double redundancy for the microcontroller, so if in the future, if we required more IO or wanted to send data to multiple places and have multiple control loops, it can be easily integrated as some of the brakouts for the components like the accelerometer are shared and others are isolated, like our TX and RX lines.


What went poorly:
Next steps:


Takeaway: I have improved at specing components, designing PCBs and become faster 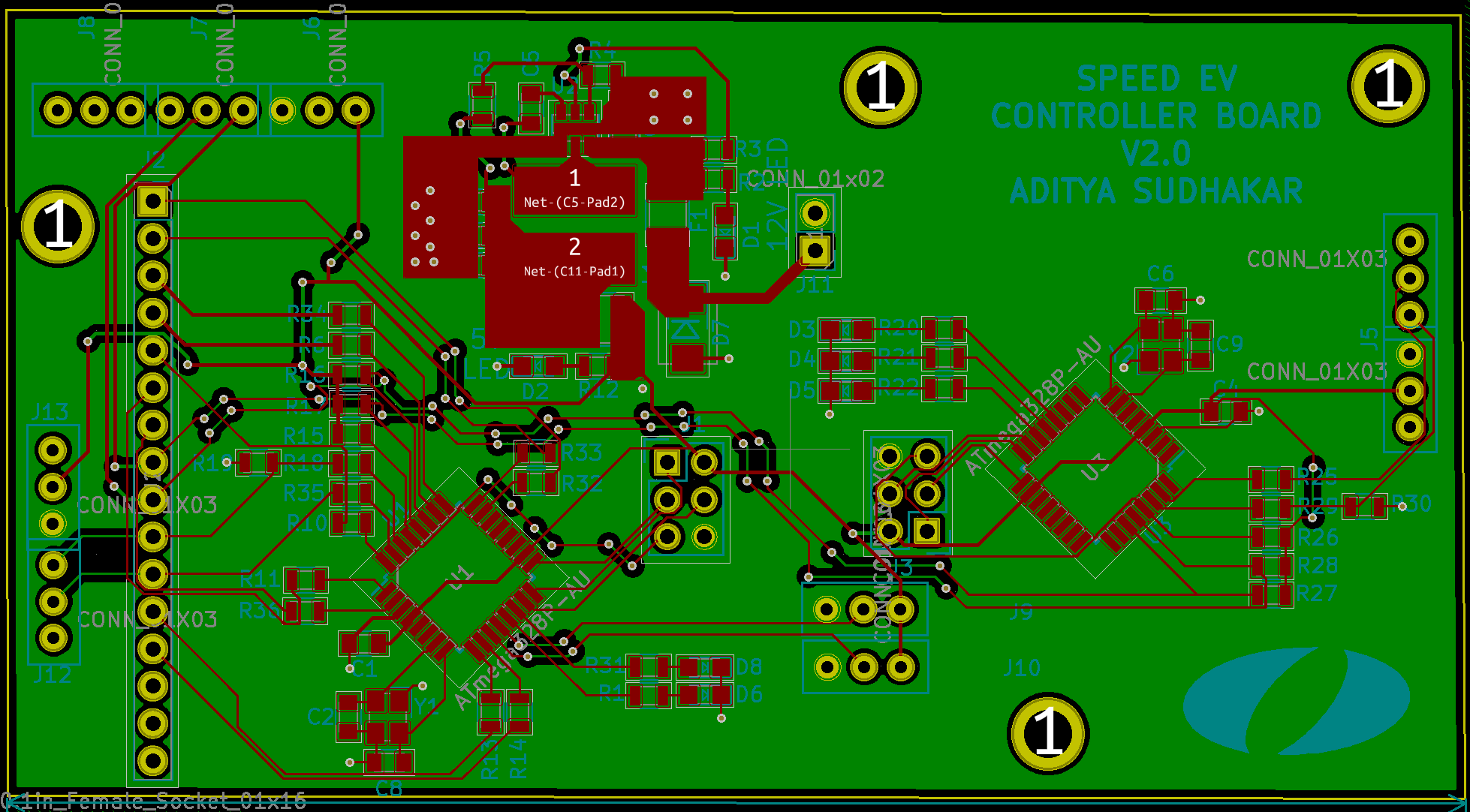 The firmware on the car is what is responsible for differentiating our project from a remote control car you buy off the shelf. Rather than routing the signal from the remote control directly to a steering or driving motor, the signal is processed and altered by an on board microcontroller. The firmware is also responsible for reading accelerometer data and outputting it over bluetooth.

Given that we all wanted to build a remote controlled vehicle with responsive controls, we determined that data from a "control room" application would inform the design of the control loop. The current iteration of the project plots the acceleration and angular velocity of the car in real time. Building this feature enables us to build more and more features later on, making it easy to extend the platform's capabilities.

A lot of the work of the work up front on the firmware side was in figuring out how to read data coming in from the RF receiver and transmit it back out to a motor. Once we eventually got that working, it was easy to start manipulating the signal. We developed an algorithm that allowed for a full range of steering at low seeds, while also attenuating the steering at high speeds to prevent the car from spinning out. We drove the car several times while we tuned the function, ultimately arriving on a parabolic attenuation curve with an offset, such that 100% steering was achieved at no throttle, and only 40% of the maximum steering angle was delivered at full throttle.

While we were able to implement a successful steering assist feature, we also hoped to develop one that could adapt in real time to accelerometer data. If the car sensed it was rotating faster than possible while maintaining traction, the car would automatically reduce the steering angle, and increase the steering attenuation factor. Unfortunately, the accelerometer data was so noisy that we could not do this reliably, and we could not sample at a high enough rate to use a rolling average of data points. If we had more time, we would have liked to debug this issue and implement accelerometer data into our steering algorithm.

Additionally, we would have liked to implement torque vectoring based on acceleration data. Not only did the accelerometer inhibit our ability to do this, but we also had trouble getting our Electronic Speed Controllers (ESCs) to work reliably with a 14.8V supply, so each motor got it’s own battery, and torque vectoring would not have enabled us to increase power delivery to the front/rear wheels as we had hoped.

I began with key requirements in mind before choosing the technologies we would use. The system had to be easily expandable, near real time, and quick to implement. After analyzing a few potential solutions, I decided to have a bluetooth connection between the Arduino and an Android phone. The Android phone would then push data through websocket to an online webapp.

The use of bluetooth allowed for an android app to control the car. The use of websockets allowed for any web application to send information to the android device, which can then change the state of the car. This opened up the possibility to have self driving programs run on the android device and send throttle and steering commands to the Arduino, or tune driver assist parameters from a web application. These are all features we would love to implement in the future.

The current web application is relatively simple. It takes in data from a websocket and plots the data using a javascript library called Plotly.js. 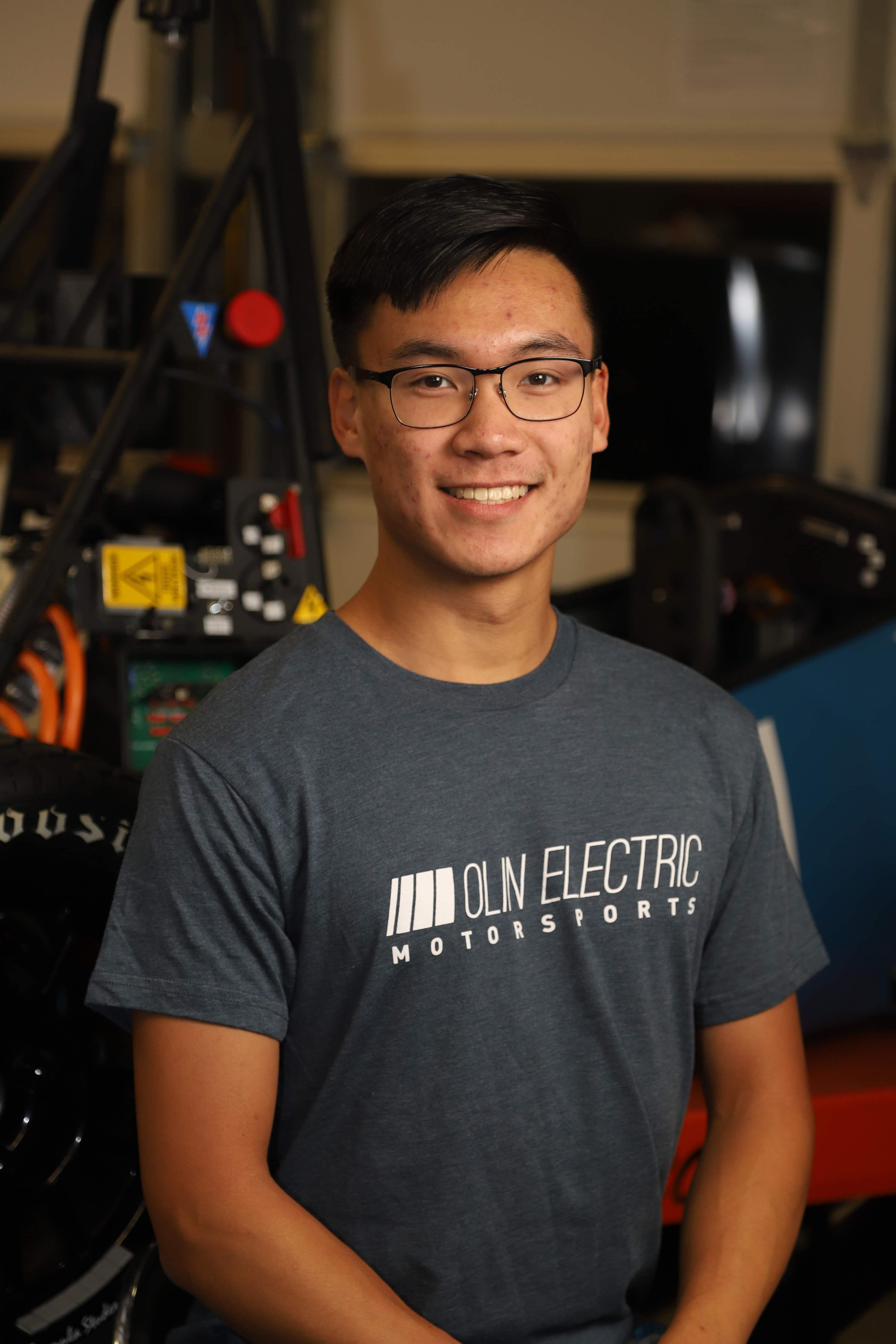 Enjoys going to bed at 9pm when there is lots of work to be done. 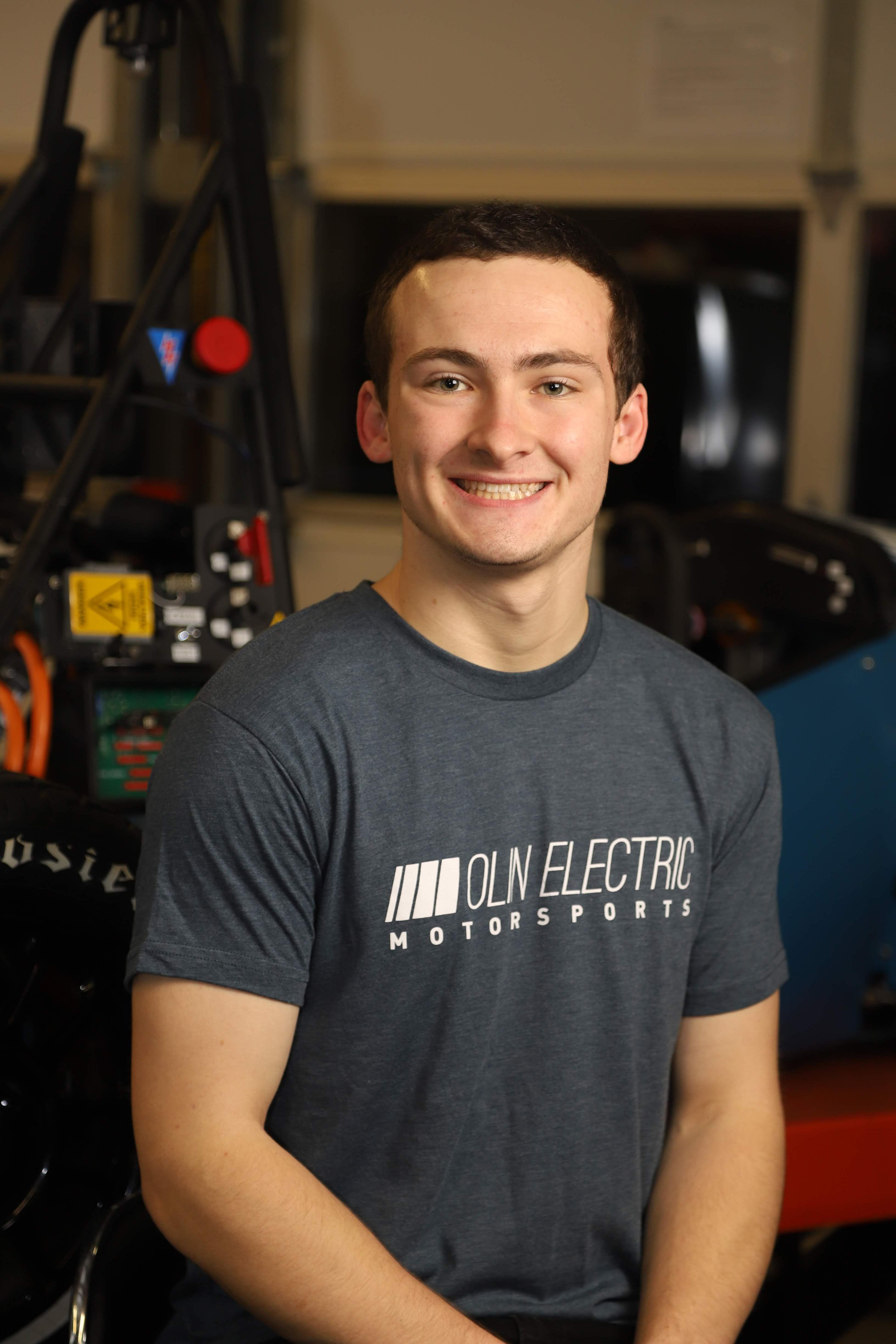 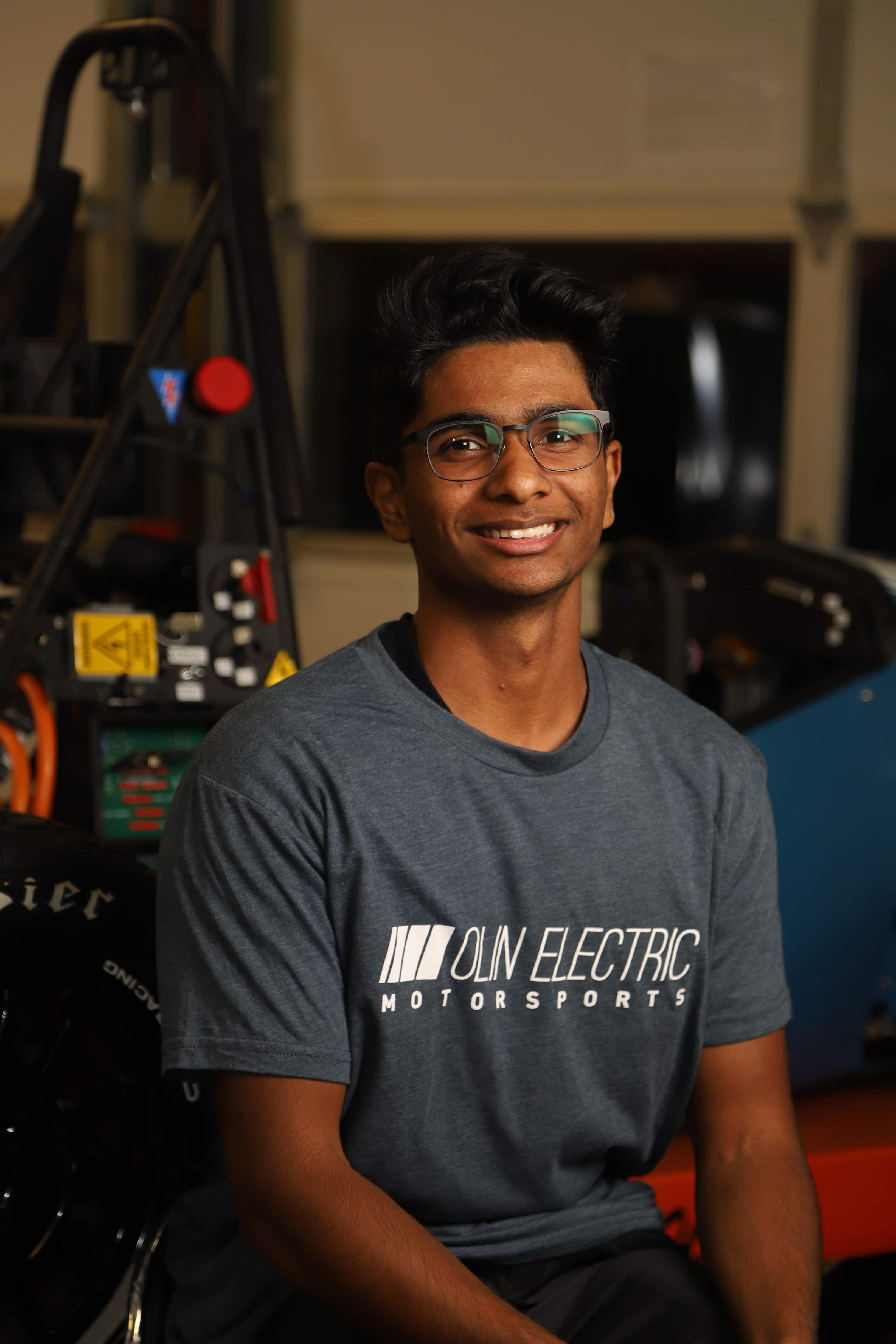 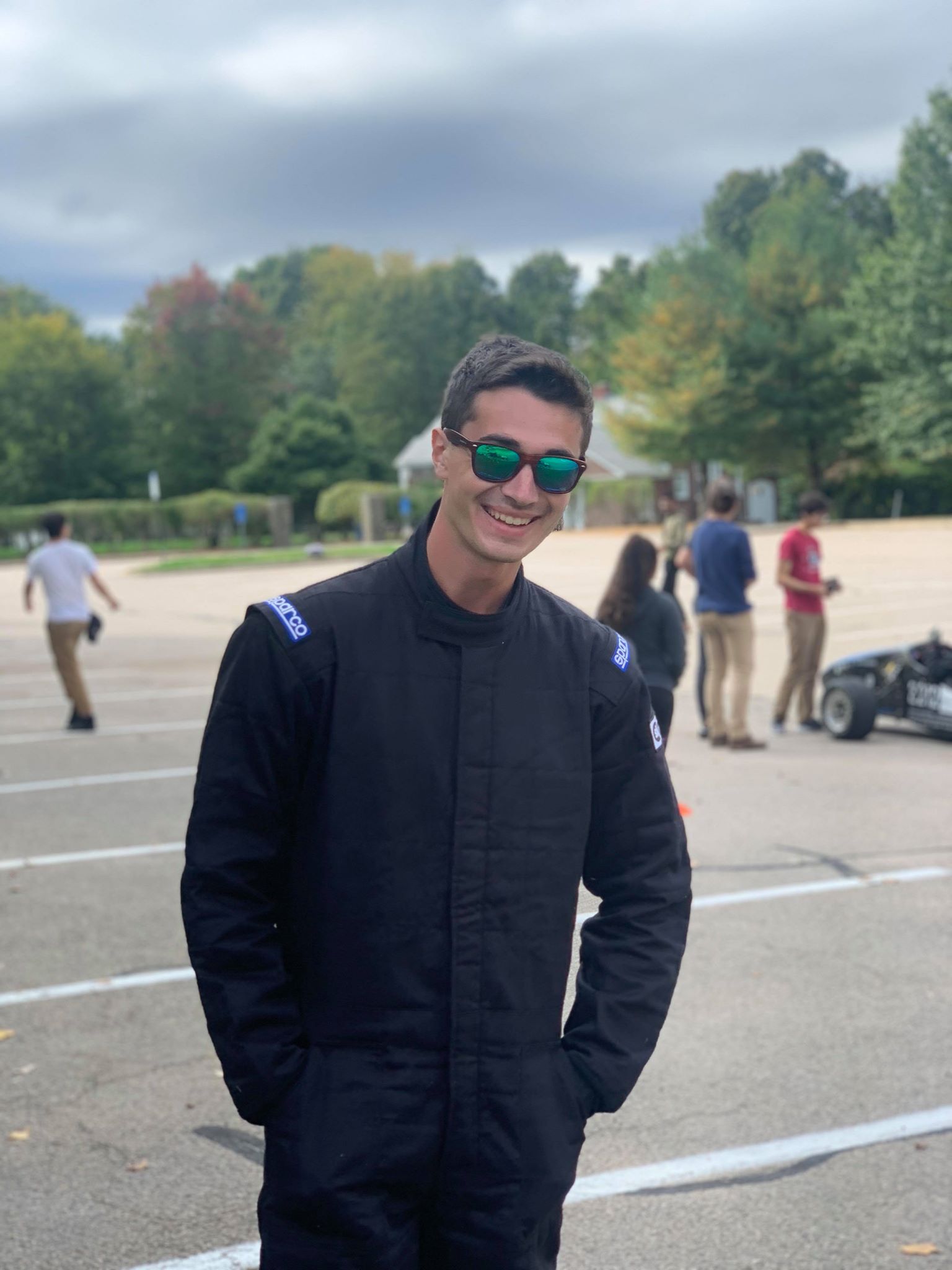 Lets get in touch. Send us a message: